Jay joined our team in March of 2005 upon graduating from The Ohio State University Agricultural Technical Institute in Wooster, Ohio, with degrees in both Greenhouse Production and Management and Nursery Management.

Early in Jay’s tenure he worked as an Assistant Grower in our 1-Quart Perennial Department and Herb Departments. On two separate occasions, while we transitioned to new staff in our Propagation area, Jay oversaw the daily operations of our Propagation Department. 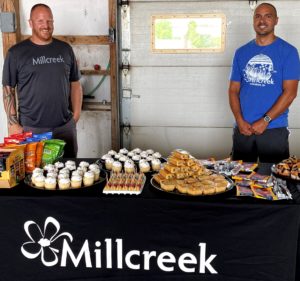 Jay contributes in many other areas of the company as well. He has been a regular member of our Social Committee which plans periodic pot-lucks for our team throughout the year and helps to organize special events. He also heads up the ordering of Millcreek apparel for our team.

Outside of work Jay is very passionate about the Christmas season and is well-known throughout Millcreek for counting down the days until Christmas, usually beginning in July! He enjoys spending time with friends, visiting family, his dog Oliver, and spending time at the lake and being on the boat!

THANK YOU, JAY, FROM THE MILLCREEK TEAM!