You Are Here:
Home
/
Megan B. Armstrong 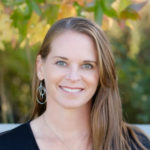 Megan joined Millcreek in July of 1998 upon graduating from Ohio University with a B. S. in Environmental and Plant Biology. She joined Millcreek Gardens as our IMPACT Department Production Supervisor and since that time she spent over ten years as a Head Grower of the IMPACT line of perennials. In the fall of 2009 she transitioned into a new role as our Business Office Manager where her responsibilities included Accounting, Human Resources, Payroll, Information Systems and Technology as well as Sales and Customer Service. In June of 2012 Megan was promoted to Assistant General Manager and given additional company-wide responsibilities including Budgeting and overall company management.

In 2004 she was named the recipient of the Perennial Plant Association’s Young Professional Award at the annual symposium in New York City.

She enjoys spending her spare time with her husband, Kevin, and their two young sons. They often spend time outdoors and enjoy watching them play sports! Beyond that she enjoys baking, gardening, her Labrador Retriever Brutus, and enjoying the company of her family and friends!