You Are Here:
Home
/
Jenn Sizemore 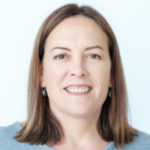 Jenn returned to Millcreek Gardens in July of 2018 after relocating back to Ohio from a 22 year stint in Southern California. Her career at Millcreek initially began many moons ago, at the potting bench, planting perennials & herbs during several summers while in high school and college. After graduating from The Ohio State University with a Bachelor of Science in Business Administration degree in Marketing in 1993, Jenn began full-time as Millcreek’s Business Manager. Her main responsibilities included accounting, human resources & customer service. Now that she’s returned from California, her responsibilities are similar, but Millcreek has grown quite a bit since the 1990’s!

While in California, Jenn worked in TV production at MTV & Comedy Central. She met her husband Bobby at a location shoot being filmed at an insane asylum. They have 2 energetic boys, Austin who is 13, Ian who is 8. When not shuttling the boys around to various sporting events, Jenn enjoys tennis, camping, bike riding and spending time with family & friends. Jenn is thrilled to be back at Millcreek Gardens!